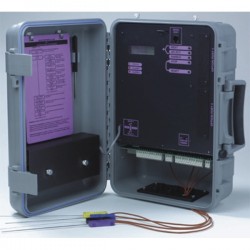 The system base is programmed for operation via the included Windows based software. Simple to complex programming is readily implemented by developing the program visually on the PC by dragging and dropping icons and interconnections, then transferring the program via RS-232 or modem to the OM-320 memory before deployment. Alarming, conditional logging, algebraic data manipulation and a multitude of other functions are easily accomplished with this visual programming software.

Designed for portable, plant floor and long-term remote data collection applications, the OM-320 incorporates low power CMOS circuitry and extensive energy conserving circuitry. The OM- 320 will run for up to one month from its six internal alkaline D-cells. The D-cells are readily accessible in a lid mounted battery holder providing for quick and easy field replacement. For longer term logging applications, low voltage external power can be directly connected to the system base. In the event of external power failure, the OM- 320 will automatically transfer to the internal batteries provided uninterrupted logging.

Included in each OM-320 system base is a general purpose digital input that provides a user programmed event or counter input, two alarm relay outputs, three TTL level digital alarm outputs and a cold junction compensation sensor for thermocouple measurements or general purpose temperature input. Input and output wiring is uniquely handled through the use of a terminal strip adapter (TSA) board which allows for mass connection and disconnection of wiring while maintaining the integrity of the sealed enclosure. Through the use of the terminal strip adapter, an OM-320 can be quickly disconnected from its associated I/O wiring harness, moved to another site and reconnected to a new set of I/O wiring.

The OM-320 system base includes a powerful multi-purpose Windows software package that facilitates serial communications, datalogger programming, real-time data display, collected data graphic display and data export to other applications. Direct RS-232 and telephone modem communications are handled with a communications screen. To establish a connection between the PC and the datalogger, just click on the serial link icon. This visual communications implementation allows for quick and simple communications between the PC and a connected OM-320 for status, collected data downloads, programming and remote control.With the OM-320 software a program is developed graphically on the PC using icons and interconnects and is then transferred to the OM-320 memory. The OM-320 is then ready for standalone logging and can be disconnected and enabled for operation from its new program. Programming the OM-320 is simple and is a three-step process:

After data has been acquired in the field by the OM-320 and downloaded to the PC via modem or RS-232 link, the software's powerful graphic data plotting tool can be used to graphically plot up to seven data channels vs. time. Data analysis is enhanced with mouse stroke zooming and a full spectrum of display options including X and Y-axis scaling and formatting, grids, cursor data display, symbols, instant min/max/average and integral view analysis and more.

The OM-320 software also provides a real-time, scrolling display of data collected by the OM-320 on a serially connected PC screen. This is an extremely valuable tool for critical real-time process monitoring as well as serving as a quick method of checking on OM-320 I/O values and status. Complying with the Windows standard, plots generated from within the OM-320 software can be printed directly or saved as *.BMP files (Windows bit map format). The *.BMP plot can be seamlessly integrated into other Windows applications including word processors and spreadsheets allowing for powerful report generation. The software also includes additional post-processing options including collected data conversion to ASCII columnar (text) files and direct output to the Microsoft Excel spreadsheet format.