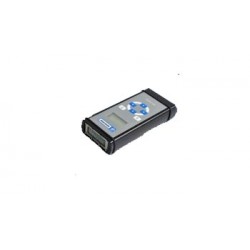 The MS-2700EX is digital LED hand-held stroboscope specifically-designed for use in the hazardous areas. As with all other stroboscopes it is commonly used to observe, analyze & measure the speed of targets/objects that are in rotational or reciprocating motion. When the flash rate of the LEDs matches the speed of the target, the target will look like it is "frozen" and stationary. If the user adjust the flash rate in either direction it is possible to put the target in "slow motion" allowing you to observe it motion.

It is housed in a extruded aluminum housing with a rating of IP65 designed for use in the toughest applications. It is powered with a 9VDC battery and incorporate 20 LEDs for flash rates up to 20,100 (350 Hz). Best results are likely in low ambient lighting conditions as the brightness is limited and should not be compared to a Xenon Strobe.

The Movistrob MS-2700EX is Intrinsically-Safe and has been certified to European Standards for use in ex-proof areas classified as zone I and 21 according to norm 1999/92/EG (ATEX 137).