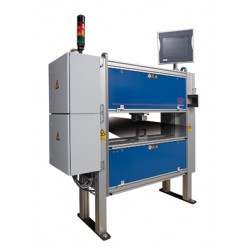 The TIP 8301.ET is based on the laser triangulation sensors and therefore ensures the measurement being independently from material constants. The system is designed as O-frame, both sensors detect the thickness according to the differential method. In order to ensure highest precision, the laser beams of the sensors are accurately adjusted during the production process using optoelectronic tools which have been specially developed. The system is ideal for monitoring high-dynamically processes due to its high measuring rate. The triangulation sensor applied on the upper side is combined with an eddy current sensor which monitors the distance of the two optical measuring sensors while allowing a software-technical compensation of temperature-induced changes of the measuring gap. Additionally, the compensation sensor is applied according to a special alignment with the measuring task in order to ensure both, a huge measuring gap and highest precision.