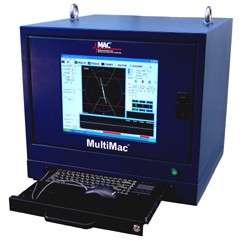 Metallic inclusions in copper tubing may appear from two major sources.   The first one comes from the material itself which can contain residual impurities from continuous casting.  The second and major source of metallic inclusions in copper finned tubes occurs during the manufacturing process. They can appear in the tube when the tool used to make the fins is breaking.  Small particles of metal (tungsten) make inclusions on the OD or even through the wall.  This leads to potential leaks when heat exchanger tubes are mounted in the shell.  Metal inclusions such as filings from finning tools can be as small as 3 mg.
Therefore they are not commonly detected by using a simple eddy current coil.  In this instance a Magnetic Inclusion Detector (MID) must be introduced to the system for better results.

In order to detect such small inclusions, the MultiMac electronics uses a second channel connected to the second half of the coil sensor consisting of a single absolute winding located in the DC field and generated by the two permanent magnets.