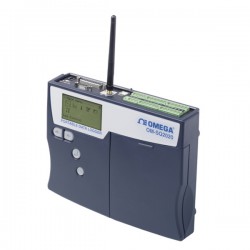 - 8 True Differential or 16 Single-Ended Universal Analog Inputs for Voltage, Current or Resistance Measurements Plus 2 High Voltage, 4 Pulse and 8 Digital Event/State Inputs
- Analog Inputs Can Be Used With Thermistors, Thermocouples, 2-, 3- or 4-Wire RTD Temperature Sensors and 4 to 20 mA Signals
- Logging Rates of Up to 100 Hz on Up to 2 Channels (On the OM-SQ2020-2F8)
- Large Non-Volatile Internal Memory Storage for Up to 1.8 Million Readings
- Ethernet (On the OM-SQ2020-2F8), Wi-FI (On the OM-SQ2020- 2F8-WIFI) USB and RS-232 Communication Ports
- Download of Internal Data to Removable MMC/SD (Multi- Media Card/Secure Digital) Memory
- Sensor Power and FET Outputs for Use With External Devices
- Easy-to-Read LCD and Simple 4 Push Button User Interface
- Up to 16 Calculated/Derived Channels Can Be Created Using Mathematical Functions

The OM-SQ2020 Series uses multiple analog to digital converters that enables true concurrent sampling and logging. This allows the user to configure a channel to log at a rate of 100 Hz (20 Hz on OM-SQ2020-1F8) while retaining different sample speeds on other channels. This makes the OM-SQ2020 Series ideal for measuring dynamic parameters that change at different rates such as temperature and pressure.

Ethernet (on OM-SQ2020-2F8), Wi-Fi (on OM-SQ2020-2F8-WIFI), USB and RS-232 serial ports are built-in. This allows simple connection to either a PC based TCP/IP network, a wireless to PC connection or to a GSM modem for remote data downloading. This flexibility enables global data access and retrieval as well as complete system integration of the OM-SQ2020 series into complex and critical applications.

The OM-SQ-SOFT software (supplied with the OM-SQ2020 series data loggers) allows logger configuration, data download and data export while giving the user full control over the OM-SQ2020. The optional OM-SQ-SOFT-PLUS software gives the user access to many advanced data analysis and data archiving/transfer features. The optional OM-SQ-SOFT-PLUS software lets you quickly and easily analyze the data from your OM-SQ2020 data logger in a familiar explorer style interface. Data can be displayed with 2 different auto scaling Y-axis. This is particularly useful when displaying widely varying data from different sensors on one graph. You can also zoom in on areas of interest, use a cursor to pick out exact values, times and dates, get a statistical summary of your data, set high and low alarm thresholds and, using the calculation function, you can create new virtual channels from existing channels. The OM-SQ-SOFT-PLUS software also incorporates a report generation facility, which allows you to create custom report templates consisting of a title page with descriptive text, headers and footers, graphs, tabular list of data, statistics and data logger setup information. Templates can be setup with any of these combinations and saves time when preparing similar presentations of data.

Up to 16 virtual channels derived from physical input channels

RESOLUTION Up to 6 significant digits

Navigate to:
Arm/disarm/pause/continue; meter any channel or alarm; select from up to 6 x pre-stored setups;
status/diagnostics/memory/time and date; download to MMC/SD